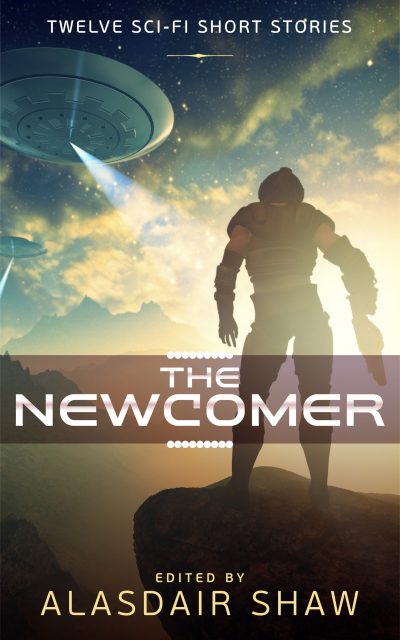 Heâ€™s welcomed and given the opportunity to become a productive member of the community, but everything comes with a price. For Jacob, it will call upon everything he believed about himself to make a decision, and either stay under the obligation to give of himself, or to be put outside the walls.

First Bonding by Tom Germann
Humanity had aimed for the stars and a glorious future in space. The alienâ€™s arrival had tarnished that shiny dream. Now the first AIs are fully coming online, even while the government tries to block their use, and humanity is once again looking to the future.

Whatâ€™s an insane AI to do and what should he target first?

The Nanny by Cindy Carroll
The first natural birth in over two hundred years brings a new life to Cardeaâ€™s family. Despite the risks, she and her husband are determined to raise a family the old fashioned way. But social habits die hard.

Right Hand by Jonathan C. Gillespie
The war with a forgotten conqueror has been over for decades, but that doesnâ€™t mean the Earth has recovered, and life in the American Midwest is only getting more dangerous. His town besieged by hunter-killer drones left over from the conflict, gifted high school senior Daniel Bell is determined to make the Army believe that the machines are somehow not being harmed by their operations.

But to do that, he wonâ€™t just have to deal with his cautious family, nervous friends, and sceptical officers. Heâ€™s going to have to take a secret journey outside the townâ€™s walls, into the teeth of a wilderness both alluring and deadly. And the most important season of his life might also be his last.

Kaxian Duty by Cherise Kelley
Three-month-old Clem faces his first day of â€œKaxian Dutyâ€ with anxiety. He is keen to find out what his assignment will be, but runs into distractions on the way to headquarters. Training will be hard. Mistakes will be punished.
Oh, and his tail has a mind of its own, which doesnâ€™t help matters any.

The Hawk of Destinyâ€™s Fist by James S. Aaron
Asarik Leah is sent to replace ShipLord Till and lead his InquiryShip on a dangerous new mission. Tradition demands she proves herself fit to take his place.